A BRIEF DALLAS INTERLUDE: PART 3 OF 12


The Plot (Courtesy of TV.com): Pam keeps Bobby in the dark about her pregnancy; Valene returns, seeking Lucy's forgiveness

Welcome back to Knots Blogging, but once again, we will be focusing on an episode of Dallas.  For some context, at this point, which would be the 1979-1980 season, Dallas was a ratings hit (it would finish this season at #6 and would end with the infamous “Who Shot J.R.?” cliffhanger that would propel its next season to #1 in the Nielsen ratings) and David Jacobs was ready to turn his attention to what he really cared about: KL.

In the Dallas universe, a lot has happened since the last episode we discussed, and nearly one year has passed.  For the purposes of this blog, of course, we are only making the occasional stop over in Texas, and only when it relates to Gary and/or Val making an appearance.  So, let’s just try to ignore all the aspects of this episode that focus on Pam and her potential pregnancy and her neurofibromatosis (and yes, that’s a real disease), and let’s also ignore J.R. sitting in his office and hatching an evil plan for Cliff Barnes, and let’s also ignore the storyline regarding Sue Ellen completely neglecting her new baby and sitting in a chair, depressed, all the livelong day.  For this episode, we will strictly be focusing on Valene’s visit to Texas and her attempts to reconnect with daughter Lucy.


Actually, after the classic opening credits sequence, the very first thing we see is Val driving into Texas, looking alert and nervous behind the wheel of her car.  It’s been nearly a year since J.R. ran her and Gary off the ranch for the second time in their lives, back in Reunion: Part Two.  We know that she’s back with some mission, some purpose, and we quickly learn that it involves Lucy.


We do cut away from Val and visit with our usual Dallas characters for awhile before we see her again, but there was an interesting line early in the episode, spoken by Bobby to Miss Ellie.  See, Miss Ellie is giving Bobby some sage advice (in her usual droll way; have I mentioned that I’m not a big fan of Miss Ellie?), and Bobby tells her that “Ever since I was a little boy, there were only two people I could talk to: you and Gary.”  Gary is not actually present in this episode, but he is still mentioned and it’s nice to see that he’s on the minds of the Ewing family members (probably the writers and David Jacobs were already planning to get the spinoff going and wanted to make sure that Gary was a remembered character who was consistently mentioned).  Okay, moving on.


Val finds Lucy at her Southern Methodist University (I believe she also pays a visit to this university to see Lucy in the KL episode Home Is For Healing, the only episode of KL to ever feature Lucy) and pleads with her to speak with her.  “Why don’t you go see J.R.?” Lucy asks.  “Maybe he can give you more money.”  Poor Val (POOR VAL, POOR VAL!) quivers and looks like she’s about to cry, and Lucy walks off in a huff, pleased with her little burn.  We see that even though a year has passed, those wounds are still fresh, especially for Lucy, and it might be harder than Val imagined to get Lucy to speak with her again.  Not willing to take no for an answer, Val calls up Bobby, knowing that he is the most kind hearted of the Ewing family (Gary is kind hearted, too, but more complex, as we will soon see) and asks if he can help her get through to Lucy.  Bobby agrees to help, and they head off to hijack Lucy from her, um, cheerleading practice? 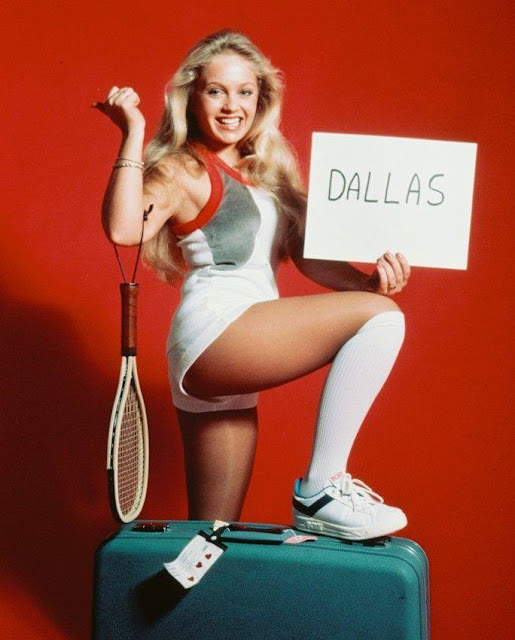 Let’s parlay for a moment and talk about Lucy being the smallest cheerleader who ever lived.  How tall is she?  Four feet?  Maybe four and a half?  I don’t know what the rules are for cheerleading, but isn’t being tall important?  I don’t know if I completely buy Lucy as a cheerleader, but maybe I’m mistaken; maybe height is not important.  Please write to me and correct me if I’m wrong.  I do know, however, that it is extremely unrealistic that Lucy later finds some success as a MODEL, which she does later on in the series.  Pretty sure that the #1 most important thing for modeling is your height; it’s the first thing they look at when they look at you, no?  Granted, her main photographer, Roger, was a bit of a psycho rapist stalker, but still, the fact that Lucy even got into modeling in the first place is pretty absurd.


But wait a minute, what does that have to do with the episode at hand?  Oh yeah, nothing, so let’s return to Lucy and Val and Bobby.  I wanna point out that I see a pretty special friendship between Bobby and Val, and I would have liked to see it explored more, either when Val crossed over into Dallas or when Bobby showed up on KL.  It seems like they have an interesting shorthand with each other; they understand each other and they legitimately like and respect each other.  Is it because Bobby loves Gary in a special way and knows that Val is Gary’s one true love, perhaps?


When Val and Bobby show up at Lucy’s cheerleading practice, we get a gander of J.R. up in the bleachers, watching through a pair of binoculars, seeing Val speaking with her daughter.  Obviously this is a tremendous plot contrivance, as J.R. would have little interest in going to his niece’s after-school practice, especially since he clearly doesn’t like Lucy very much.  Fortunately, the writers throw in a little line where he looks over at his friend and is like, “You’re right, Bill [NOTE: I FORGOT THIS CHARACTER’S ACTUAL NAME], it was a great idea to come to this practice!”  Then he cackles in his usual, wonderful J.R. style and we know he’s hatching an evil plot.


The evil plot is basically a repeat of the one we saw back in the two part Reunion episodes.  J.R. quite simply wants both Gary and Val out of his life completely.  I often have found myself wondering why, however.  As I wrote before, Gary has no real interest in the family business, the vast Ewing Oil enterprise, and Val would also have no interest in such things. J.R., however, is convinced that they want to remarry and come to Southfork for “A slice of the pie.”  This is not based in logic, but rather in J.R.’s own paranoid worldview.  Since J.R., God bless him, is a schemer and is always up to something duplicitous, he thinks everyone else around him is equally scheming.  His fears are not based in anything concrete but simply in how he views the world around him because of the person he is.


Anyway, the date is set for Val and Lucy to meet up in her motel room and talk about things, but J.R. shows up first and orders Val to get out of town.  This time there’s no money or anything, just the fact that he told her to get out of town in 1962 and she has disobeyed him.  This is early in the run of Dallas when I still found J.R. to be, often, a frightening character (he definitely softens up as you get deeper into the series and his hair starts to turn grayer), and he’s actually pretty scary here.  Certainly Val is angry at him, but she’s also afraid of him (and I think always will be; we’ll discuss this more in the five glorious KL episodes where J.R. crosses over).  Fortunately, just as things are looking real shitty for Val, in comes Bobby with Lucy at his side.  They heard everything, you see.  Now Bobby is going to take J.R. out for a nice little chat, and Lucy has heard J.R. confess to some of his evil doings (along with the fact that Val really and truly never took any money from him).  Mother and daughter are reunited, Lucy has a great big old grin on her face (this shot of her smiling would serve as Charlene Tilton’s main image in the opening credits for, oh, two or three seasons, I do believe), and the episode ends on a pretty happy note.


This was a much faster writeup than the last two, probably because the vast majority of this episode concerns itself with the Dallas folk.  Honestly, while I think the two part Reunion episodes from season two along with our next episode, Return Engagements, are basically essential viewing for anyone who is getting ready to dive into KL, I’m not sure if this episode is required.  It’s definitely more focused on Dallas than on the relationship between Gary and Val, especially since Gary himself doesn’t even show up this time.  However, we still get little glimmers and a few important things, mostly for setting up future events.  I also think it’s an important episode for reinforcing just how much the deck is stacked against Gary and Val, to the point where Val can barely even contact her own daughter without J.R.’s interference.  For instance, Val tells Bobby that, “We’ve been talking and might start seeing each other again.”  This is exciting news, and it definitely dovetails well into the next episode we will be discussing, the backdoor pilot of KL entitled Return Engagements.